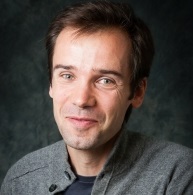 Thomas Tourdias, MD PhD, born in 1978, obtained is MD in 2008 and received medical training in radiology at Bordeaux University Hospital with a particular focus on brain imaging. He obtained his PhD in neurosciences in 2011 during which he started to explore the pathophysiology of brain inflammation by combining in vivo imaging with the other tools of basic neuroscience. He especially contributed to better understand how edema associated with acute brain inflammation is regulated by the water channel aquaporin 4. This work (Tourdias et al. Neuroimage 2009) received a cum laude award from the European Society for Magnetic Resonance in Medicine and Biology and the “René Djindjian prize” for the best scientific work of the year by the French society of neuroradiology. He worked as a research fellow at the University of Stanford (CA, USA) in the “ultra high field MR” group headed by Pr Rutt in 2012-2013 during which he gained additional expertise in the physics and the methods of magnetic resonance imaging. He especially developed new imaging methods to explore brain inflammation in vivo (Tourdias et al. Neuroimage 2014). He joined the research group of Stéphane Oliet named “neuron-glia interactions” in the neurocentre Magendie, INSERM-U862 in 2014. He currently shares his time between clinical activity in the neuroimaging department of Bordeaux hospital and research activity in Stéphane Oliet’s lab. His research thematic is focused on the pathophysiology of brain inflammation with development of imaging biomarkers and is strongly translational from small animals to patients. He recently received grants from the laboratory of excellence “BRAIN” as PI (Project “MEMO-MS”-120K€) and “TRAIL” as co-PI (Project “HL-MRI”-146K€) to start a new project on the consequences of brain inflammation for the hippocampus that he is conducting with a technician, a master studend, a PhD student and a post doc.